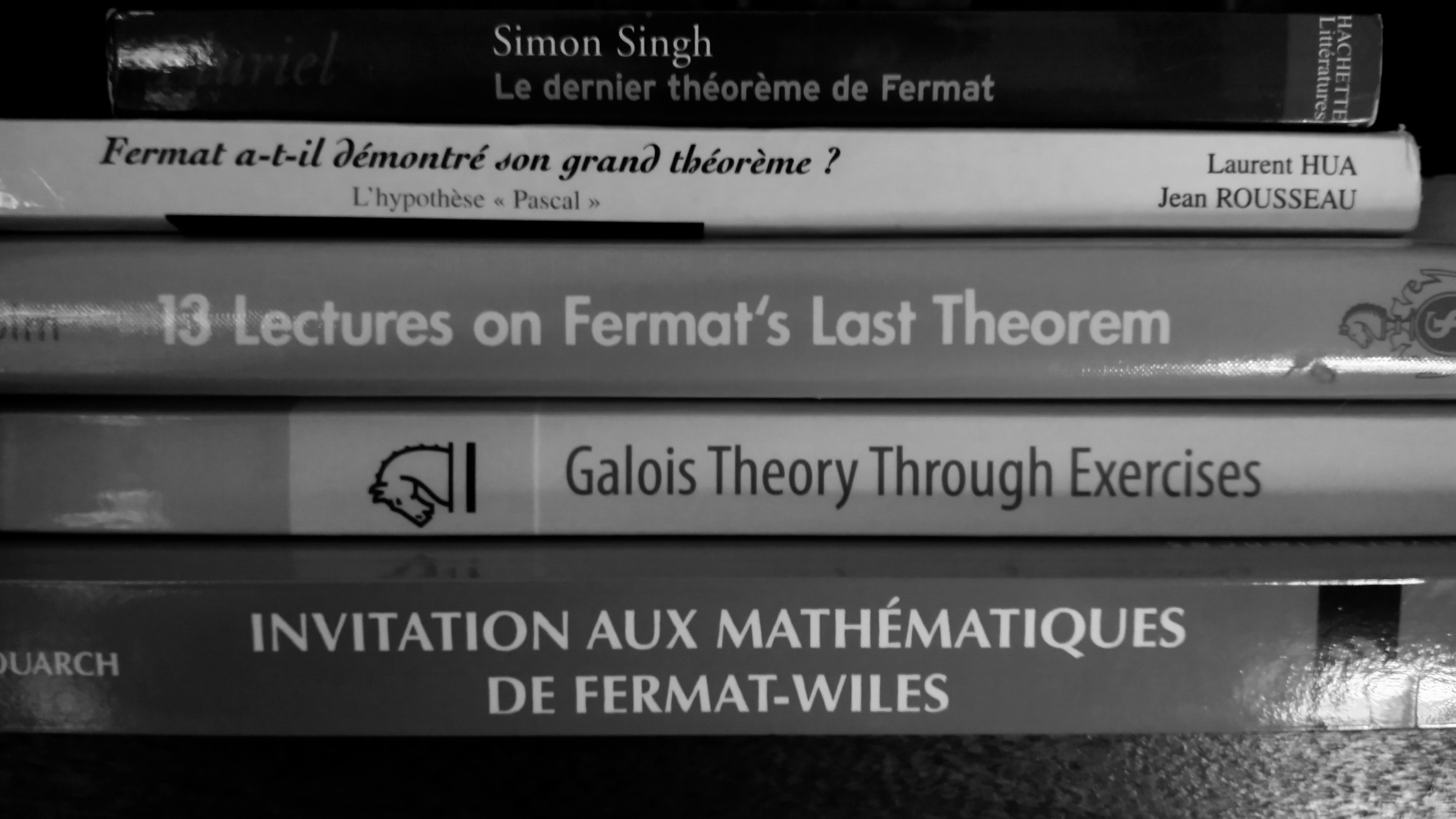 I haven’t published many articles these days, the main reason being that I got attracted into the history of Fermat’s last theorem. This theorem states that the equation:

Only has trivial integer solutions (i.e. one of the elements is 0) for . This problem fascinated mathematicians for more than three centuries before it was finally solved!

Here is the collection of books I read so far, I ordered them from the least mathematical oriented to the toughest.

Requires absolutely no mathematical background. It is a very nice introduction to the problem, mostly focusing on the history of (and around) Fermat’s last theorem. Some mathematical details, along with various interesting puzzles are presented in the text and in the appendix. Really nice if you want to know what this theorem is about, and why so important it became, without digging into the mathematical details.

This book is split in two parts: the first one is purely historical and does not require to know much about mathematics. The authors present the possibility that Fermat may have proved his theorem. Though the consensus seems to claim the opposite, proving than Fermat did not prove his theorem has never been done!

The first part is a thorough analysis of Fermat’s correspondance with other mathematicians of his time and it does become moving, especially towards the end. This analysis is so detailed that you even get a sense of Fermat’s sense of humor in some of the letters presented!

The second one is more mathematical, but a high school student could understand most of it. It gives what could be the starting point of a proof with the tools known by Fermat at his time. Unfortunately, it does not go too far, but the approach is interesting!

This book presents many special cases of proofs of FLT with many details. Though the original problem is to find solutions in the set of integers, the author propose to study this equation in other sets as well: Gaussian integers (), -adic numbers (they truely are a hidden gem of number theory)… As the title states, it is for amateurs though this is presented as your usual math book: with theorem and proofs. Note that however, an emphasis is put on examples.

This book aims to present the proof given by Wiles. Obviously, some details will not be presented, but this is an amazing introduction. Topics presented contains introction topic (the case ), Kummer’s proof… Soon enough, the author jumps to Elliptic Functions, Elliptic Curves and Modular Forms which are essential.

It contains a lot of exercises and clear proofs, if there is only one book to read on the topic (and you are not afraid of mathematical details), this is probably the best one to read!

This one is interesting: it has been written in 1979, before Fermat’s last theorem was actually proven. It summarizes many of the efforts put into trying to prove FLT and features some of the proofs. The historical context is essential, as many of the theorems are presented with notes regarding their history.

A large part of the book is devoted to the fascinating proof by Kummer and its limitations. Many other results with various importance are also presented: estimates, equivalence of FLT with other statements… One I found particularly interesting is:

A minor regret is that many of the statements are not proved and left “as exercises” with no clue regarding their level of difficulty nor hints. It is particularly interesting to read it with Fermat’s Last Theorem for Amateurs as some of the proofs not present in this book are in the other.

In some of the books, you will need (on top of usual algebra, basic number theory and analysis tools) to know more advanced topics, such as Galois theory. To that end Galois Theory Through Exercises by Juliusz Brzeziński was my best read on this topic. It has a chapter completely dedicated to cyclotomic fields, which are an object commonly used in the books above!

Number Theory 1: Fermat’s Dream, by Kazuya Kato, Nobushige Kurokawa, Takeshi Saito this is actually the book that drove me into the study of Fermat’s Last Theorem. It is really well written, with a lot of figures, exercises and corrections.

The books below are my to read list. If you have any opinion on them, let me know in the comments!

Mordell is a name that I now met many times! I want to read it mostly for its historical value, and to know what he had to say about this theorem, a century and a half (almost) ago!

A Course in Arithmetic by Jean-Pierre Serre

Please note that all the links above are affiliate links. However, having read these books, I am confident about the quality of my recommendations!

IntroductionZindi is hosting the Fossil Demand Forecasting Challenge, where competitors have to predict the amount of units sold for vari...… Continue reading